Paul Giannone (known to all as “Paulie Gee”) grew up in Brooklyn, NY but moved to New Jersey as an adult. For most of his professional career he worked with AT&T and their subsidiaries as an information technology staffer and eventually a consultant. And candidly he never liked the work – he never felt he was very good at it either. But he needed to support his family so he stuck it out.

While he didn’t love his work, he loved pizza — absolutely loved everything about it. And at the age of 56, he took an incredible leap of faith – returning to Brooklyn and opening up Paulie Gees — a pizza restaurant. He’s been remarkably successful and “Paulie’s Slice Shop” followed in Brooklyn as did Paulie Gees franchise restaurants in Chicago, Columbus and Baltimore.

Paulie secured 15 different investors that helped him launch the restaurant. But he also took out a home equity loan and put his own “skin in the game” to pursue his dream. It was a big risk but it has all worked out. As Paulie told us, “This is beyond my wildest dreams, I had no idea how happy I could be…I am doing what I was born to do, what I am wired to do.” 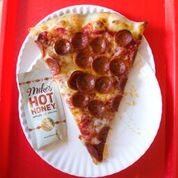 *A slice of Paulie Gee’s “HellBoy” pizza. All photos by Kenny Chung.