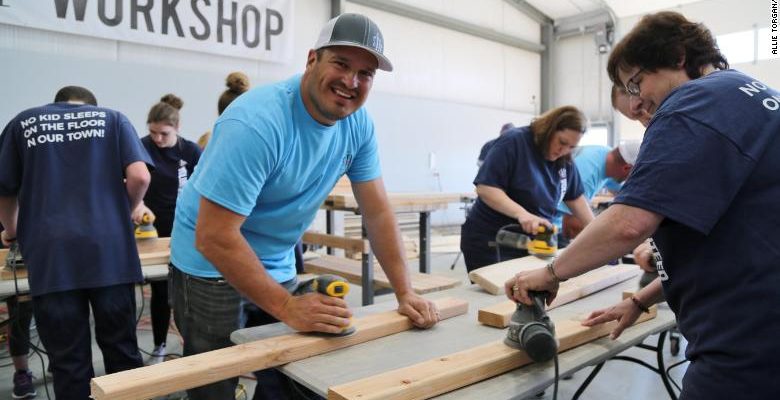 I first learned about Luke Mickelson and Sleep in Heavenly Peace, a non-profit that he founded in 2012, via the CNN Heroes Program. I immediately thought to myself “I have to interview this man.” Then I found out he lives in Twin Falls, Idaho – a mere 2,369 miles from my home in New Jersey.

But as luck would have it, I was traveling to Salt Lake City for a business conference. So I rented a car and drove three hours across Idaho’s wide open spaces to the national headquarters of Sleep in Heavenly Peace.

So what is Sleep in Heavenly Peace? It’s an amazing non-profit with 150 chapters across the United States. In 2018, they built 4,144 bunk beds for children whose families can’t afford a bed for them. In 2019, they expect to build over 10,000 beds.

Those might seem like a lot of beds but here’s a scary number. Sleep in Heavenly Peace estimates that 1.5 to 2.0 million kids in America sleep on the floor each night.

Here’s the story of how Luke and his wife Heidi founded “Sleep in Heavenly Peace.” Included in their journey was a decision for Luke to quit his full-time job in order to focus on the organization’s rapid growth.

Click here to learn more about and/or donate to Sleep in Heavenly Peace. It is an amazing organization doing amazing work across the United States (with plans to expand internationally in the year ahead).